The phrase "six degrees of separation" was originally coined by a popular Hungarian author and playwright, Frigyes Karinthy, to describe his theory that everyone on this planet is connected to every other person on the planet by a chain of five other people. 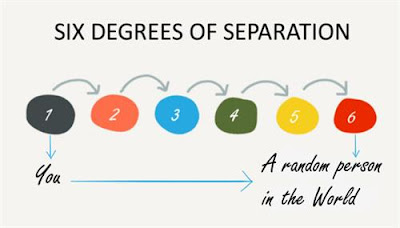 Whether or not this theory can be proven literally, it was an early declaration that all human beings are connected, all part of a network, and that idea has become ever more popular in both science and literature.

Karinthy illustrated his theory in a short story in 1929. In 1990, American playwright John Guare wrote a play to explore the connections between humans which he called Six Degrees of Separation. It was enormously popular on Broadway, having a run of 485 performances, and it was nominated for both a Pulitzer Prize for Drama and a Tony Award for Best Play.

In 1993, Guare morphed his play into that rarest of all things: a movie for unabashed intellectuals—for people who love words and ideas, who talk about books and visit art museums, who know both Shakespeare and Catcher in the Rye, or at least know about them. The script is like a Shakespearean play in that the characters recite long monologues about weighty subjects, and the protagonist, Paul—a young and handsome black street hustler who cons, or bewitches, everyone he meets—enchants his marks with a long, and surprisingly incisive critique of Catcher in the Rye, which was on everyone's must-read list at the time.

The way the six degrees of separation works out is that Paul first picks up a well-educated, closet-gay white guy named Trent, who quickly becomes infatuated with him. In order to keep him around, Trent tells Paul stories, like Scheherazade trying to seduce the sultan.


The main thing Paul wants to know is about Trent's contacts—these would be potential marks. Trent tells Paul a story about each of the contacts in his address book, which Paul absorbs word for word. But Trent becomes inspired by a larger goal: not satisfied with being Scheherazade, he aims to be Henry Higgins in My Fair Lady by transforming Paul into a guy who can fit in with rich white people. He teaches him how to talk and what to talk about. He teaches him about books and museums and libraries, where Paul studies his victims' interests. Paul stays with Trent for about 3 months, and takes from him all his good stuff—TV, audio system, etc—but Trent doesn't resent the loss.


Armed with all this information, and dressed in a preppy outfit, Paul sets out to con three marks: an art dealer, a foundation manager, and a doctor—all parents of Trent's friends. Paul gains entry to their parents' homes by appearing at their doors with a stab wound and claiming to have been mugged in Central Park; he says that he came to them for help because he knew their kids at prep school. He knows so much about them and their kids, and has such a charming manner, that everyone believes him implicitly.  Once he gains entry into their homes, he tries to gain entry into their affections: he tells them that their children love them, and he tells him about his own parents, claiming that his father is Sidney Poitier—a pioneering black actor who was universally lauded in the 1990s—thus adding a hint of glamor to his persona. He spins that story further, claiming that Poitier is directing a movie of Cats, a musical that was enormously popular on Broadway, but seemed trivial to critics and intellectuals. Ramping it up, he claims he can get them parts as extras, human extras. For a New Yorker living opposite Central Park, a walk-on role in a Broadway musical is a wicked temptation.

Thematically, the point of all this is that humans are connected to each other not only by a chain of other humans, but also by a chain of common feelings. Everyone is attracted to Paul and the stories he spins. He appeals to common human needs and expresses ideas that everyone finds appealing. Paul treats his marks with more courtesy and consideration than their own children.

The movie dramatizes only one of Paul's encounters with parents; the others are reported as stories. Two of his marks take in him, give him a place to sleep and a little spending money, and then go on with their lives, leaving him alone in their homes. But the art dealers, Flan and Ouisa Kittredge, take him into their life as well as their home. They tend Paul's wound and give him their son's new pink dress shirt. They introduce him to their visitor and invite him to join them for dinner. In one extraordinary scene Paul whips up a delicious dinner for them out of odds and ends in their kitchen, while entertaining them with more stories. 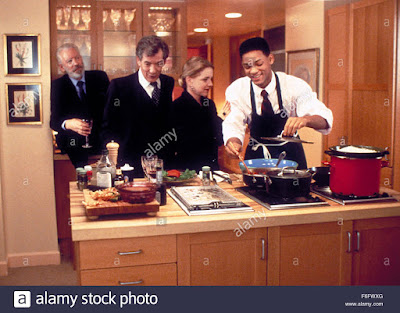 With Flan and Ouisa another sort of connection is formed, a true emotional bond. Paul falls in love with the Kittredges, just as he entrances them. He wants to be like them, to know what they know, to do what they do, to be with them like a son—like a loving and devoted son, not their own resentful children. Flan manages with effort to retain some sense of detachment, but Ouisa feels an unfamiliar burst of love and affection.


In addition to all these rich people, Paul cons a couple of poor young actors from Utah who are waiting tables for a living, Rick and Elizabeth. Paul not only swindles them heartlessly out of their hard-earned savings, he initiates Rick into gay sex—in a horse-drawn carriage in Central Park, no less—just for the experience. And Rick accepts the experience as something he can use in his development as an actor, or so it seems.


Beneath the theme of connection is the theme of imagination and story telling. In fact, from the number of lines given to the proper use of the imagination you might think the playwright's main goal was to express his insights on this subject. Instead of being a mere vehicle for creating space fantasies and video games, Paul proposes that imagination is an essential tool for understanding ourselves and other people. The magic of a good story is illustrated both by the tales Paul tells the Kittredges and by the way Flan and Ouisa transform their interaction with him into an anecdote that fascinates their social circle.

The inherent problem with being a good con man is that you literally lose your soul—you submerge and deny your own identity, your selfhood; Paul rejects his old life on the street and loses himself in the role of rich college kid.

In addition a con man needs to be heartless—to disregard the effects his deceptions might have on his victims. Paul seduces Rick for the fun of it, without thinking of how it might affect Elizabeth. When Rick confesses all to Elizabeth, hoping she will understand, she flies into a rage and rejects him completely, whereupon he leaps off the fire escape to this death.

The effect of this is that for the first time Paul is forced to confront the fact that actions have consequences. But it is too late. The police arrest him, either for this swindle or for others, and throw him in jail. There he gets lost in the system because the Kittredges don't know his real name. Later they hear that a prisoner who fits Paul's description has hung himself in his prison cell with his shirt. It seems that lacking both a soul and a heart, Paul is unable to cope with reality.

The effect of all this on Ouisa is striking. After she and Flan have regaled their luncheon companions with this story and its poignant ending, Ouisa suddenly stands up and walks away from the table, saying, "We're turning an experience into an anecdote to entertain our friends. But it was an experience." A long closing shot shows her striding with determination down Fifth Avenue. The audience is left to wonder what it means. Is she giving up her old way of life? Why did her interaction with Paul  have such an effect on her? I think she started to see that she and Flan were also con artists—private art dealers who parlayed every experience into dinner conversation, for the sake of financial gain or social status, and like Paul, they ignored the emotional consequences of their life-style.

The movie is very much like a play. It is even divided into acts by scenic views of the city accompanied by appropriate mood music. In addition, the acting style is slightly theatrical; sometimes the actors seem to be reciting lines, rather than acting naturally. The movie's theatricality is highlighted by the glamorous, high-fashion outfits that Oisa wears in the major scenes.

The script is played with high melodrama, but a satirical attitude underlies the whole. Guare pokes gentle fun at the "elite," who live on the upper east side in Manhattan, and send their kids to Harvard, of course, and work crosswords in ink, of course. The scene where all the parents and children get together to try to figure out Paul's identity is hilarious because of the stereotypical ways each kid immediately takes offense at their questions.


All the acting is excellent, and the performances of Will Smith (as Paul), Stockard Channing (as Ouisa) and Donald Sutherland (as Flan) are riveting.

I happened to run into this movie on the MGM channel on cable TV, and having seen it in the 1990s, I recorded it. It was a rare treat to see it again.